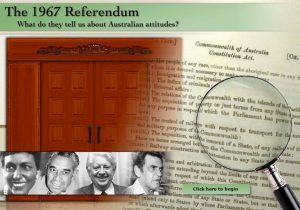 We’ve made planning your Australian history lessons easy with our rich online resources for Year 10 students. The Australian History Mysteries secondary website includes a range of interactive case studies that have been designed specifically around the Australian Curriculum: history as outlined below:

The modern world and Australia

The Year 10 curriculum provides a study of the history of the modern world and Australia from 1918 to the present, with an emphasis on Australia in its global context.

The twentieth century became a critical period in Australia’s social, cultural, economic and political development. The transformation of the modern world during a time of political turmoil, global conflict and international cooperation provides a necessary context for understanding Australia’s development, its place within the Asia-Pacific region and its global standing.

The content provides opportunities to develop historical understanding through key concepts, including evidence, continuity and change, cause and effect, perspectives, empathy, significance and contestability. These concepts may be investigated within a particular historical context to facilitate an understanding of the past and to provide a focus for historical inquiries.

Overview content for the Modern World and Australia includes the following:

You simply need to introduce the lesson/activities to your students, encourage them to tackle the group or individual tasks and assess their progress.

Your students will be stimulated by the variety of resources and activities including:

Teachers can assess each of the tasks by viewing students’ PDF, online lesson worksheets and ‘game-playing’.

This unit provides a way of introducing students to the social impacts of the Great Depression on Australia in a simple, entertaining and challenging way. Its aim is to help students be more aware of the variety of experiences and the complexity of the factors involved in determining how people were affected by the Depression. It does this by using an empathic approach to the period, while still tackling it in a historically accurate way.

Students investigate wartime experiences through a study of World War II in depth. This includes a study of the causes, events, outcome and broader impact of the conflict as an episode in world history, and the nature of Australia’s involvement.

Australian History Mysteries Resources:
Why did the Government lie about the bombing of Darwin?

Students investigate one of the most significant episodes in Australia’s Second World War experience. Why was the bombing of Darwin ‘hushed up’ by the government? Was there a warning that was ignored? Was there looting and cowardice by soldiers? Was 19 February 1942 Australia’s ‘great day of shame’? Students visit the sites, analyse the maps, interrogate witnesses, sequence the events, and come to their own conclusions.

An interactive entitled, The Bombing of Darwin, is also available for this case study.

It is February 1942. A Japanese attack on Australia is expected. Can you prepare Darwin’s defences and protect Australia from this attack?

What are the mysteries of Maralinga?

Students explore an important Australian Cold War event that is often overlooked in Australian history: the testing of atomic weapons in Australia in the 1950s. They ask what it reveals about the Australia in which it occurred and in doing so explore both their own values, and develop an empathetic understanding of the values and attitudes of Australian society during the Cold War. Students also investigate the effects of nuclear testing on Aboriginal people from that area and ongoing debates about responsibility and compensation since that time.

An interactive entitled, Cold War Timeline, is also available for this case study.

Students investigate struggles for human rights in depth. This will include how rights and freedoms have been ignored, demanded or achieved in Australia and in the broader world context.

In 1928 at least 31 and possibly more than one hundred Indigenous people were killed near Alice Springs after a local dingo trapper was found dead. A Government Inquiry found the killings were justified. Were they? How can such a terrible event have happened? Students investigate the evidence to try to establish the facts, and to understand the attitudes, values and clash of cultures that made these events possible.

How have Indigenous people’s citizenship rights changed over time?

Students explore the evidence to critically discuss the issue of Australians’ attitudes to Indigenous rights and racial equality. They explore how the apparent racism revealed by the 1965 Freedom Ride in places such as Walgett and Moree can be reconciled with the overwhelmingly positive example of the 1967 referendum. Or how the apparent hostility of many towards the Aboriginal Tent Embassy in 1972 can be reconciled with the awarding of equal pay to Aboriginal pastoral workers in 1966 and the adoption of the Racial Discrimination Act in 1975. The case study also compares the Yirrkala people’s claim to legal ownership of their land in 1971 and the Mabo case in 1992.

An interactive entitled, The 1967 Referendum, is also available for this case study.

The 1967 Referendum — What do they tell us about Australian attitudes?
Students decide whether the 1967 Referendum should be included in a ‘human rights hall of fame’ by looking at a range of evidence and a range of different views. Does it deserve a place along with such events as women obtaining the right to vote in Australia in 1902 and the Mabo High Court decision of 1992?

Students investigate the murder mystery of Juanita Nielsen, a prominent Sydney activist in the 1970s, who opposed the development of the historic Victoria Street in inner Sydney. They must decide who killed her and why. The focus of the case study is to use her death to put the society of the time under the microscope — the green bans, union rivalries, political corruption, a powerful criminal presence, police involvement, clashing egos and an emerging environmentalism movement.

An interactive entitled, Who killed Juanita Nielsen? A cold case, is also available for this case study.

The Snowy Mountains Hydro-Electric Scheme is always presented as the beginnings of, and a triumph for, multiculturalism in Australia. If it was, how were former enemies able to work together apparently so successfully in a new community? How were tensions, even hatreds, overcome? Focusing on some specific case studies, students investigate a number of possible explanations and draw their own conclusions about the scheme.

Vietnam — Can you be a Vietnam War ‘Myth Buster’?

There are many aspects of the Vietnam War that are popularly accepted. This unit puts them to the test. Did Whitlam bring the troops home? Were returning soldiers splattered with paint? Did Australians oppose the war? Were protesters just scruffy university radicals? Were soldiers forced to go to Vietnam? The unit introduces such themes, and lets students be the ‘myth busters’ by providing them with evidence that will support or refute each claim. They make the decisions!