Have you ever wondered why the state or territory you live in was settled after the arrival of the Europeans in 1788?

Well you can be pretty sure it was for one of two main reasons – either as a gaol for convicts, or because of the land, to graze sheep or cattle.

But why were the other states, originally called colonies settled by the British Government?

That is what you will investigate in this unit. You will get the chance to examine the birth and growth of one colony in particular and then you will be able to use your own research skills to explore the history of your own state or territory.

Format
This unit of study is presented as a website which includes interactive elements, videos, PDF and worksheets (in Word Doc format). The unit is compatible with computers and iPads. 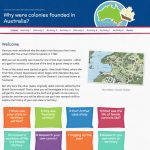 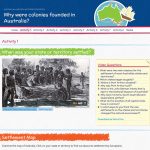